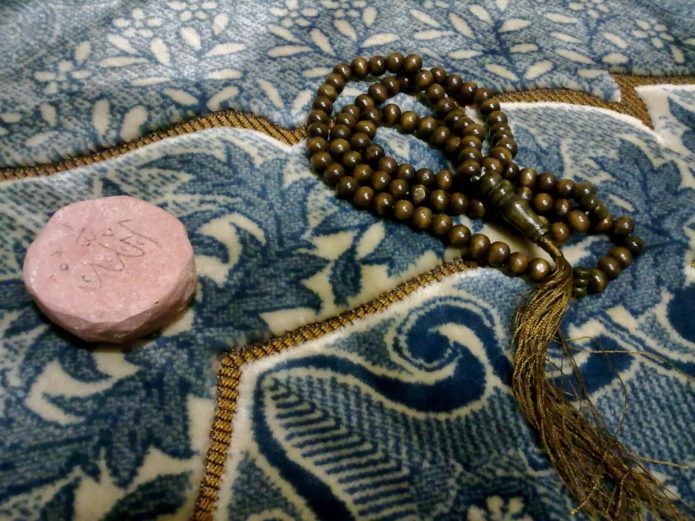 Some of my Muslim brothers and sisters ask why we pray on the turbah? Can you please elaborate, as to why we pray on it and on where this hadith came from?

1. TheEarth is a Place of Prostration

There is a narration narrated in Sahih Muslim and Sahih Bukhari, as well as the Shia books, where the Prophet (pbuh) says:

“The earth is made for me as place of prostration and purification.”

From this narration, we understand that when we prostrate, it should be on ‘earth’ or something directly from the earth. This includes soil, sand, pebbles and minerals (except gold and silver). It also includes paper and leaves from trees because they grow from the earth. (Tissue is probably the last option if nothing else is available).

The other condition is that the thing we pray on must not be wearable or edible. Therefore, we cannot pray on leaves from plants which are edible or from which clothes can be made (e.g. cotton).

“Prostration is only allowed on earth or things that are from the earth, except those things which can be worn or consumed”. (Wasailul Shia, 3:591)

We do not pray on carpet because it is not earth and is not made from earth. The above narration says that we should pray on the earth, and therefore carpet is no something we can pray on. This is confirmed by other narrations. Abu Said al-Khudri narrates about the Prophet:

“We were in the mosque and the roof of the mosque was made of date palm branches so that we could not see up into the sky. One day it rained heavily. The Prophet (pbuh) led the prayer with us, so much so that I saw the marks of the mud on the forehead of the Prophet (pbuh…” (Bukhari, 2:386)

At the time of the Prophet, carpets did exist and if the Prophet (pbuh) wished, he could have prayed on a carpet or laid the mosque’s floor with carpet. However, this never happened.

3. Narrations about the Straw Mat

We also have many narrations from Sunni sources that the Prophet (pbuh) would have a small straw square that he would prostrate on. It seems that when it was too hot to place one’s forehead on the soil, the Prophet would use a straw mat to prostrate on. As this is made from trees, it is considered a product of the earth.

Um Salama: ‘The Prophet would pray on a small strawmat’.

Anas: ‘The Prophet would pray on a straw mat’.

Therefore, it is at least a precaution to avoid praying on carpet as the Prophet (pbuh) did not ever do this. Imam al-Sadiq (as) says: