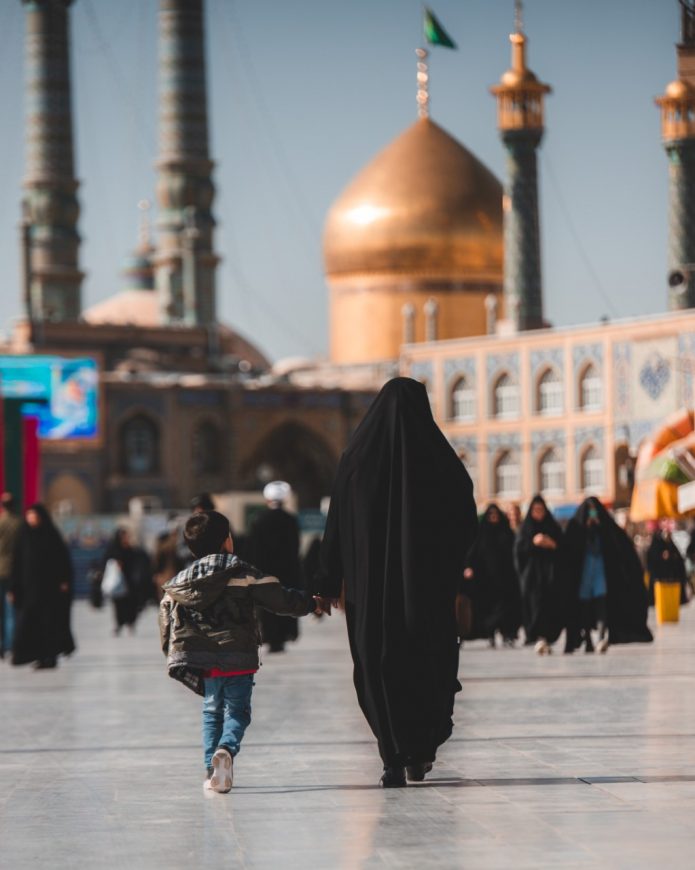 Many people here–and there are saying that hijab was not compulsory during the time of the Prophet (S).  They say, the Ayah about wearing the Hijab 24:31 is addressing people who want to be considered Mo’minat (believing women), and not just regular Muslims or even non-Muslims. Others say that the Islamic Hijab was mandatory on ‘believing women’ only to be distinguished from non-believers and hence female slaves did not wear the Hijab at that time. If you could provide some insight especially with references, inshallah, that would be greatly appreciated.

Thank you for your question. You have quoted several misgivings. For clarity I will deal with each one separately.

1) There are ample historic and biblical evidence that Hijab (i.e., ladies modest dress including a headcover) was common women’s clothing prior to the advent of Islam.

Undoubtedly, today’s cosmetic and nude secular culture is unprecedented in human civilization. Therefore, Islam did not initiate the Hijab, rather has modified and improved it. The following are some evidential examples:

a) According to the Talmud pious Jewish women would wear shawls over their heads when they would leave their homes. (J.B. Hurely, Man & Woman in Biblical Perspective, p. 270)

b) Wearing a veil to cover the hair was also mandatory on Christian women in public places such as churches. St. Paul in his first letter to Corinthians says: “If a woman does not cover her head, she should have her hair cut off; and if it is disgraceful for a woman to have her hair cut off or her head shaved, she should cover her head. (1 Corinthians 11:6)

c) Wearing a veil was so commonly practiced prior to Islam that the Oxford Encyclopedia of the Islamic World, though mistakenly, claims that ‘the practice was borrowed from elite women of the Byzantine, Greek, and Persian empires, where it was a sign of respectability and high status.’

d) Please Google the term ‘wimple’ to find out how a typical European woman was covered during the Middle Ages.

e) One of the best sources for the study of the Jahiliyya (the pre-Islamic era) culture is the poems of their famous poets. Unlike how it was portrayed in the film ‘the Message’, and similar Hollywood productions, ample evidence from the Jahiliyyah poetry indicate that head covering was a common clothing amongst the women of the Jahiliyyah era.
For example, Al-Nābigha, was a very famous poet of the Jahiliyya whose poems were hung in the Ka’ba in Mecca. His death predated Islam. In describing the wife of one of his friends he says:

Similarly, Hassān; the famous poet who lived before and after the advent of Islam, in one of his famous poems satirizing Abusufyan says:

In conclusion, wearing a veil was already a common practice prior to Islam amongst Jewish, Christian and even pagan women of Quraysh though not to the Islamic requirement. Thus, as mentioned above, Islam has only modified and improved it.

a) The Arabic verb Le yadhreb na is an imperative verb which clearly indicates that Hijab is an obligation not an option. Thus, one of the conditions of embracing Islam for women was to observe the Islamic dress code. Umaima Bint Roqayqa came to the holy Prophet (P) to pay allegiance to him and Islam. Allah’s Messenger (P) said “I pay allegiance to you (in Islam) that you make no partners with Allah, … and that you do not display yourself like that of the times of Jahiliyya.” (Musnad Ahmad, vol. 11, p.437) This evidence indicates that even the Jihiliyya Hijab (i.e., covering the hair but displaying the neck and bosom) was not enough in Islam.

b) As mentioned earlier wearing a headscarf was already a common practice. However, women’s necks and bosoms were often uncovered. Thus, the Almighty Allah is asking them to also cover their necks and bosoms with the long ends of their headscarves.

c) With regard to the difference between ‘believers’ and ‘Muslims’: In the terminology of the Qur’an, ‘believers’ refers to whom we call today ‘Muslims’, whether fully practicing or not. Hence, the Qur’an often invites the believers to believe (4:136) to repent (66:8), to be pious (57:28), etc. Some of them disliked particular divine orders and even disputed with the Prophet (P) (8:5-6), yet the Qur’an refers to them as ‘believers.’ Similarly, the title of ‘Muslim’ in the Qur’an is used both for those with the least faith (49:14) or the highest level of faith such as the Prophets (2:128).

d) The expression of ‘Mo’minat’ (believing women) does not negate the obligation of Islamic Hijab on non-Muslims living in an Islamic society. It is rather used as a motivating factor to encourage Muslim women to observe Hijab. For example, if an Australian PM in his public address says: You Australians give people a fair go! He does not mean non-citizens (PR or tourists) can be unfair! The expression of ‘believing women’ implies that if you do not abide by the law, you are a hypocrite or a disbeliever.
To show you how incorrect the differentiation between Mo’minat (believing women), and others is in your quoted question, let’s look at the preceding Ayah where the Almighty Allah says, ‘say to the believing men to lower their gaze and guard their private parts.’ (24:30) If the expression of ‘believers’ excludes non-believers, then there is no obligation on non-believing men to lower their gaze nor to guard their private parts (in avoiding adultery). Because according to this claim, God would only be addressing ‘believing men’ to lower their gaze and guard their private parts!

e) Unlike Christianity that deems women’s headscarves as a symbol of man’s authority, women’s headscarves in Islam are part of their modest social behaviour, because clothing is a social behaviour. In order to obtain and maintain a social modesty, Islam has ordered men (and women) to lower their gaze, as it has ordered women to dress modestly. Imam Redha (a.s) in describing the wisdom behind this law says: “Looking at the hair or similar parts of women-married or unmarried- is forbidden, for it provokes men and leads to molestation and sexual corruption.” (‘Elalu-Sharāye’, vol. 2 p.565)


3) As for the Hijab of female slaves:

b) The main source of this misconception is a misinterpretation of Ayah 59 in Surah 33 where the Almighty Allah states: “O Prophet! Say to your wives and your daughters and the women of the believers that they must draw their cloaks (Jalābib) close around them (in public). That is closer to be known(as modest women), and thus they may not be molested, and Allah is All-Forgiving (of the past mistakes) Most-Merciful.

Some exegeses of the Qur’ān suggested that the phrase ‘closer to be known’ means ‘closer to be distinguished from the female slaves!’ They further claimed a context for the Ayah that when the wives of the Prophet (P) were going out at night, some hypocrites of Medina used to harass them and when one complained to them, they would justify that we assumed they were female slaves. Upon that the above Ayah was revealed to distinguish the outer clothing of free women from female slaves! (Al-Durrul Manthour, vol.5 p.221) They further narrate that whenever Umar ibn Khattab would see a female slave wearing a headscarf, he would pull it off of her head and would not allow her to dress like free women. (Kanzul-‘Ummal, vol.9,  p.199)

We cannot agree with the above interpretation and fabricated narrations for a number of reasons:

I. This interpretation clearly implies that Islam does not care about the molestation of female slaves! Obviously, this is in conflict with all Islamic standards. Thus, even some scholars have explicitly denounced this interpretation. For example, Ibn Hazm; a renowned scholar in the 5th century (A.H) commenting on the above interpretation says:

“As for refuting the claim of distinguishing free women from female slaves, that is because the religion of Allah is the same (for all), and the nature of females (in attracting men) is the same in free women and female slaves… and thus, that interpretation is undoubtedly false… this is a blatant lie of a liar, for it means the Almighty Allah would allow the sinful people to molest female slaves and this (claim) is an everlasting catastrophe. Not even two Muslim scholars have ever disagreed that adultery is forbidden to both free and slave women and the punishment of an adulterer to either is the same. For this and other reasons, this interpretation should not be accepted after having the clear words of Allah’s Messenger (P). Therefore, the words of no one should be accepted unless it is (correctly) quoted from Allah’s Messenger.” (al-Muhallah, vol. 2 pp. 248-249).

II. The above interpretation of the Ayah is contrary to some Shi’a and Sunni narrations which indicate Hijab was obligatory on all women whether free or slave. For example, ‘Ayesha; one of the wives of the Prophet (P), narrated that the Prophet (P) came to her and one of her female slaves (whose hair was uncovered) hid herself. The Prophet (P) asked ‘Ayesha if she had reached the age of puberty? She said, yes. Then the Prophet (P) tore a piece of his turban and said to her: Cover your hair with this. إختَمِری بهذا (Ibn Majah, vol. 1 p.517)

Another example can be sited from the history of the battle of Camel. Umm Kulthum; the daughter of Imam Ali (a.s) goes to visit other ladies alerting them about the mischief-makers. Sh. Mufid (r.a) narrated: “She accompanied her female slaves whilst there were all fully and modestly dressed [مُتَخَفِّرات].” (Al-Kāfe’a, p. 17)

IV. Take a moment and picture an image of a rapist. Without doubt, you are thinking of a man! Perpetrators of sexual violence are almost always men. Statistics beyond doubt show that females are by far more vulnerable than men on sexual assault and hence. “One in five women and one in 71 men will be raped at some point in their lives in the USA.” According to the same report, 91% of victims of rape and sexual assault are female, and 9% are male. (National Sexual Violence Resource Center 2012-2015) Therefore, females need more protection. They need to protect themselves by the way they dress and interact with the opposite sex. Simultaneously, there must be a strict law to prevent molestation and punish its perpetrators. Islam on the one hand has made Hijab, as a modest dress, mandatory on all women, and on the other hand ordered men to lower their gaze and also has announced a severe punishment for perpetrators of molestation. In Chapter 33 after commanding women to cover themselves with their cloaks, the Almighty Allah states: “Now, if the hypocrites and those in whose hearts is a disease and those who spread false rumours in Medina do not cease (from annoying others) We (Majestic Allah) will surely urge you (Muhammad) against them (to punish them), then they will not be your neighours in it except for a little while. Accursed, they will be seized wherever they are confronted and will be executed forcefully.” (33: 61-62) Unless the above laws are mandatory equally on all members of a society their sexual security will not achieved.

V. On a final note, I believe there is a discrepancy between the dress code of female slaves for Salāt and their public dress code. According to authentic narrations [Wasae’lu-Shi’a, vol. 4, p.412] from the Imams of Ahlul-Bayt (p.b.u.t) there has been a leniency on their headscarf only when praying perhaps because they were new to Islam and Islamic practices. There is no evidence from the Qur’an or authentic Ahadith that any group of women were allowed to appear in public without appropriate Hijab.