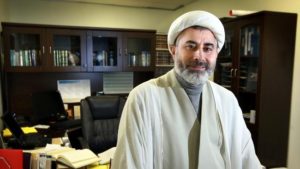 Sheikh Mansour Legahei is a distinguished Islamic scholar whose prominence is most high among Muslims in the English-speaking world.

Born in Abadan, Iran, in 1962,  Sheikh Mansour was posted to Australia in early 1994. Since then, with English being his third language, he has achieved great success in delivering academic lectures and courses to reach the English-speaking audience in Australia and around the world.

In 1997, he co-founded the Imam Husain Islamic Centre in Sydney, Australia. He has been its Religious Director ever since its founding. In 2001, he launched the eHawza, a unique online Islamic Seminary program in English, which currently has close to 300 students in almost all English-speaking countries.

Dr Leghaei has publications on various topics which are available in English, Farsi, and Arabic.

Currently residing in Iran, Sheikh Mansour typically delivers an average of 20 classes & lectures/week to students and audiences from around the world, including countries like the US, UK, Australia, New Zealand, Denmark, Sweden, Kenya, and Tanzania.

Apart from his weekly classes, Sheikh Mansour is also currently working on the following projects:

Sheikh Mansour is well known for his expertise in Islamic Theosophy and Mysticism, on which his many courses are available.

His extensive studies in the Islamic Seminary – PhD in Islamic Theosophy – in Qom, Iran, provide a rich source for his students and the wider Muslim and even non-Muslim audience to take advantage of.

His main teachers in the advanced studies (Bahs Kharej) in the Islamic Seminary of Qom include: