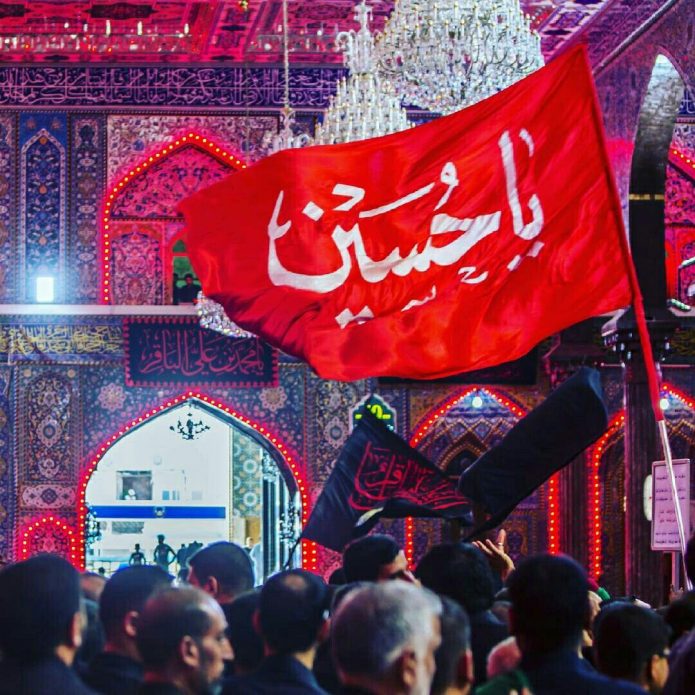 I am still learning about my religion. I saw an image that read ‘Ya Husayn’. Someone told me that this is a form of shirk (polytheism).

That person explained to me that ‘Ya Husayn’ is shirk because it is a call to other than Allah (swt), and the Shia intend with this call to al-Husayn that he do with them what Allah (swt) does with His servants of forgiveness and entering the Paradise and being saved from the fire etc.

He also explained to me that the letter يا in Arabic is known as نداء, which means it is a tool to call out to someone. The issue with this ‘Ya Husayn’ statement he said, is that a person is calling out to al-Husayn. Since al-Husayn has been martyred and is with Allah in the life of Barzakh, what would calling him out mean, he asked me?

Here is a brief reply for those whose heart is open to truth:

1. All Messengers of Allah including those who invite to their call are ‘callers to Allah’ (See: Surahs 33:46, 46:31-32) and all humans throughout the history are expected to positively answer their call.  The Almighty Allah in the Qur’an states: “O you who believe! Answer the call of Allah and His Messenger when he calls you…” (8:24)

According to his analogy the Holy Prophet (s) died 1400 years ago and he is in Barzakh, so “what would answering his call mean today”?! Or may be only the people of the Prophet’s time had to answer his call and not us?!

2. ‘Labbayk’ means ‘Here I am, at your service’. All scholars are unanimous that saying ‘Labbayk’ to a human whose obedience is Islamically allowed is permissible and often obligatory. Imam Bukhari has opened a chapter in his ‘Sahih’ named: “the chapter of saying Labbayk and Sa’dayk” under which he narrated a Hadith from Mu’adh saying: I was with the Prophet (s) who said to me: یا معاذ O You Mu’adh! I said: Labbayk  O Messenger of Allah Wa Sa’dayk. (Sahih Bukhari, Book3, Hadith 128)

Ibn Battal in his commentary on the above Hadith states: the meaning of Labbayk is ‘I am standing at your service’… and Sa’dayk means ‘I am honoured for this service’. Imam Nawawi also says: It is Mustahab to say ‘Labbayk’ in reply to someone who is calling you.

3. According to the person’s argument the Holy Prophet (s) should not have called out to Mu’adh (یا معاذ) because it would be shirk to use “the Arabic letter یا to other than God”!!

4. Al-Hamdolellah that person accepts that al-Husayn (peace be upon him) was martyred. The Almighty Allah (swt) in the Qur’an clearly states: “And say not of those who are killed in the Way of Allah ‘they are dead’. Nay they are alive but you perceive not.” (Surah 2, Ayah 154)

5. He said “Shia intended with this call to Al-Husayn رضي الله عنه that he do with them what Allah does with His servants of forgiveness and entering Paradise and being saved from the fire, etc…”.

If he means Shia believe al-Husayn will forgive them and admit them into Paradise independent of Allah, this is a big accusation to the Shia. But if he means al-Husayn is a true leader whom Allah has ordered to follow and has promised his followers that they will be admitted into Paradise, yes for sure that’s what the Shia believe. The Almighty Allah states with regards to true leaders like al-Husayn (peace be upon him), that ‘We made them leaders, guiding by Our Command.’ (Surah 21, Ayah 73). I am aware that this Ayah is firstly about the Messengers of God but surely it includes their true successors like al-Husayn (peace be upon him) as well.

6. When Shia say ‘Labbayk Ya Husayn’ they only mean ‘Labbayk to the path of al-Husayn’ which is the true path of Islam, they mean Labbayk to support his cause which was ‘standing against all tyrants’, as he quoted from his holy grandfather: “O you people! Whoever lives at the time of a tyrant ruler who treats the Haram of Allah as Halal, who breaches the covenant of Allah, who acts contrary to the tradition of the Messenger of Allah and deals with the slaves of God sinfully, but he does not stand against him verbally or in action, Allah has promised to associate him with that tyrant in the hereafter (in hell).” (Tabari, vol. 4 p. 304)