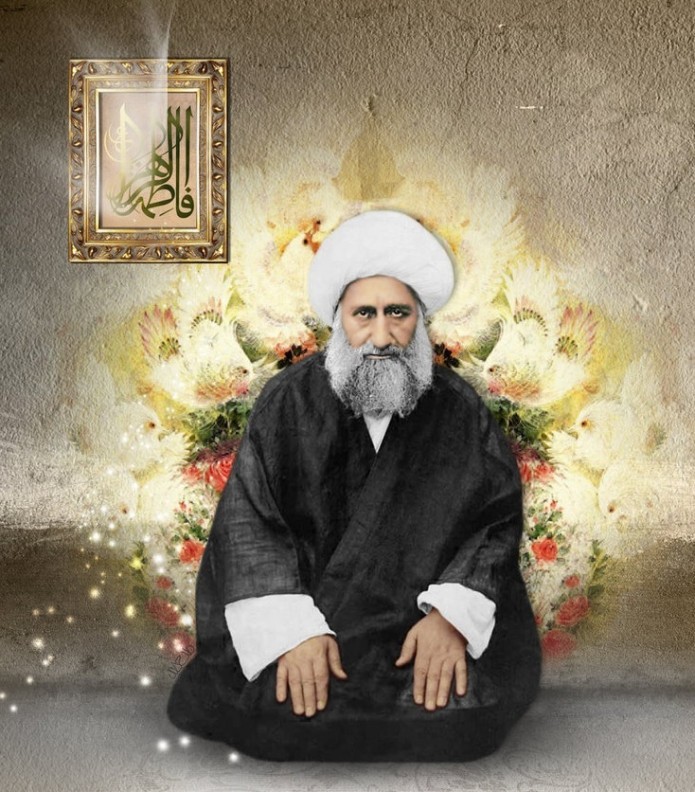 Who was the spiritual teacher and mentor of Imam Khomeini? I have heard that his teacher was a very outstanding mystic. Can you please go into some detail about this person?

The main spiritual teacher and mentor of Imam Khomeini was the late Grand Ayatollah Mirza Sheikh Muhammad Ali Shah-Abadi (1875-1950AD), one of the great Shia mystics of the 20th century. The late Ayatollah Shah-Abadi without doubt had a key and defining impact on the mystical and spiritual personality of Imam Khomeini.

The blessings of the Almighty Allah upon Imam Khomeini (r.a) are indisputably the most significant of all Muslim scholars in the history of Islam. The Islamic Revolution in Iran and the establishment of an Islamic state under the full authority of Muslim jurists only, is a favour that the Almighty Allah did not bestow upon any other scholar throughout the history of Islam.

In the entire blessed life of Imam Khomeini (r.a), two decades are the most significant of all. The first is the decade during which he studied Irfan under Ayatollah Shah-Abadi (r.a) commencing from 1928, and the other was the last decade of his life commencing from February 1979, during which he established the Islamic government in Iran.

Experts assert that the first decade was a causing factor for the latter.

Ayatollah Shah-Abadi was one of the main teachers of Imam Khomeini (r.a) in Irfan[1]. The late Imam Khomeini was very much influenced by his teacher and repeatedly quoted from him in his books, referring to him as “The Perfect Arif Sheikh Shah-Abadi.”

In acknowledging the impacts of his teacher, Imam Khomeini said in one of his speeches:
“Indeed, our honourable Sheikh had the right of spiritual life on me that my hands and tongue are insufficient to appreciate.” [27 April 1984]

The son of Imam Khomeini; the late Seyyed Ahmad said:
“I asked my father what he studied under Ayatollah Shah-Abadi, he replied: Sharh Fosoos[2] and Mesbahul-Ons[3] and Manazelu-Saa`erin[4].

– I asked how many classmates did you have? Imam Khomeini replied: Three students if it were crowded, otherwise usually it was only me.”

Ayatollah Shah-Abadi was the Imam of the grand mosque in the Bazaar of Tehran, Iran. When he would stand on his prayer mat to lead the prayer, he would become detached from this world, and when he would sit up from his Sujood (prostration), tears would flow onto his cheek and beard.

His recitation of Du`a Kumail was very significant. He used to recite Du`a Kumail in the same mosque about two hours before Fajr prayer at dawn with a few people who were enthusiastic to attend such a spiritual supplication.

Some of His Recommendations

His son, Ayatollah Nasrullah, narrating from his father says:
“My father always reminded us of the Salawaat of Fatima (s.a) before the Fajr prayer[5]. And even if you are not spiritually prepared to pray the night Prayer, make sure you are awake at its time even for a cup of tea!”

“One day he was invited to give a lecture at one of the mosques in Tehran. To save his time and the time of others he made his speech very short, but proposed to the audience that if anyone was really interested in self-purification and self-building, they should come and see him later.

One of the businessmen from the audience came to him later and requested a prescription for self-purification. Ayatollah Shah-Abadi gave him three orders: 1) Be mindful of Salaat in its fixed times, especially in congregation as much as possible 2) Be fair in your transactions and don`t be greedy 3) Although the obligation of Khums payment is annual, try to pay it monthly.

I followed his instructions for a couple of months until on one occasion I was praying behind a Sheikh in one of the mosques in Tehran and during the prayer, to my astonishment, I noticed that the Imam was momentarily disappearing. Immediately after the prayer I shared my observation with him. With a big surprise he humbly replied that before he attended the prayer he had been involved in some family problems and hence could not fully focus on his prayer at all times. It was only then that I realised that I had my first mystical experience. The Imam had been disappearing from his position every time he lost his concentration during the prayer.”

Imam Khomeini (r.a) said: “My teacher, the late Shah-Abadi would recommend to me to frequently recite Surah al-Hashr (59), especially from Ayah 18 to the end of the Surah.”

The Perfect Arif; Grand Ayatollah Shah-Abadi, departed this temporary world to his eternal dwelling in nearness to his Beloved One, the Almighty Allah, in 1950 (1369AH), and his body was buried at the shrine of Hazrat Shah-Abdul-Azim in Tehran.

1. Another important teacher of Imam Khumeini in Irfan was Ayatollah Mirza Jawad Maleki.
2. Sharh Fosoos by al-Qounawi, the second most advanced textbook in Theoretical Irfan, is an explanation on Fosoosul Hekam (the Gems of Wisdom) by Ibn al-Arabi.
3. Mesbahul-Ons (the Light of Intimacy) by Ibn Fanari, the most advanced textbook in Theoretical Irfan, is an explanation for ‘Meftahul-Ghayb’ by al-Qoonawi
4. Manaselu Saa’erin by Khaje Abdullah al-Ansari with its most famous explanation by al-Kashani is the main textbook in Practical Irfan.
5. Salawat of Fatima (s.a) is to say: “ Allahumma Sallé Alaa Fatima Wa Abiha Wa Ba’leha Wa Baniha Wa Serrel Mosta’da’e Feeha Be Adadeh Maa Ahata Behi Elmok.”