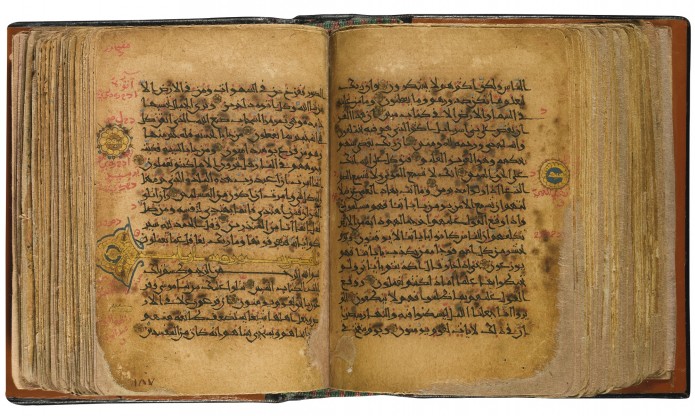 It is said that in early times, Arabs did not add dots to certain letters as is written today. How did the inclusion of dots in the Arabic language develop over time, and to what extent could this change and confuse meaning over the centuries, especially regarding the sensitive process of transmission of the Holy Quran and the Ahadith?

I believe in my ‘Introduction to the Sciences of the Quran’ which is taught in Semester 4 of eHawza I had spoken about it (Editor: see here for more details: eHawza diploma).

The science of ‘putting signs and dots’ on the words of the holy Quran is called in Arabic علم إعجام القرآن (the science of making Quran readable for non-Arabs). The common Arabic font during the advent of Islam was a kind of Kufi script which had no dots nor any signs (E’rab). Arabs, especially the literates, did not have any problem reading those texts as many of them were eloquent and well versed in their mother tongue. Besides, most Muslims knew the holy Quran by heart and never needed to read its text.

With the spread of Islam and the conversion of (large numbers of) non-Arabs, the need for making the text of the holy Quran readable for non-Arabs emerged. Although there is no unanimity among the historians as to who is the first person who added the dots and signs to the original text of the Quran, there is an indisputable fact that this development was fulfilled under the instruction of Imam Ali (a.s). Al-Qalqashandi; the famous Egyptian linguist of the 15th century A.D. says: “ The first person who invented Arabic grammar was Abul-Aswad al-Doeli by the order of Amirul-Mo’meneen Ali Ibn Abi Talib (May God honour his face- and he is also the first person who put the dots on the words of the holy Quran.” (Sobhul-A’sha, vol. 1, p. 420) أول من وضع النحو أبو الأسود الدوئلي‏، بأمر أمير المؤمنين عليّ بن أبي طالب- كرم اللّه وجهه- و هو أول من نقّط المصاحف النقط الأول على الاعراب.

Abul-Aswad was one of the students of Imam Ali (a.s) who died in 69 (A.H). Other opinions suggest that this science was developed by Yahya Bin Ya’mar (died in 129 A.H), or by Nasr Bin ‘Asem (died in 89 A.H), who were both the students of Abul-Aswad.