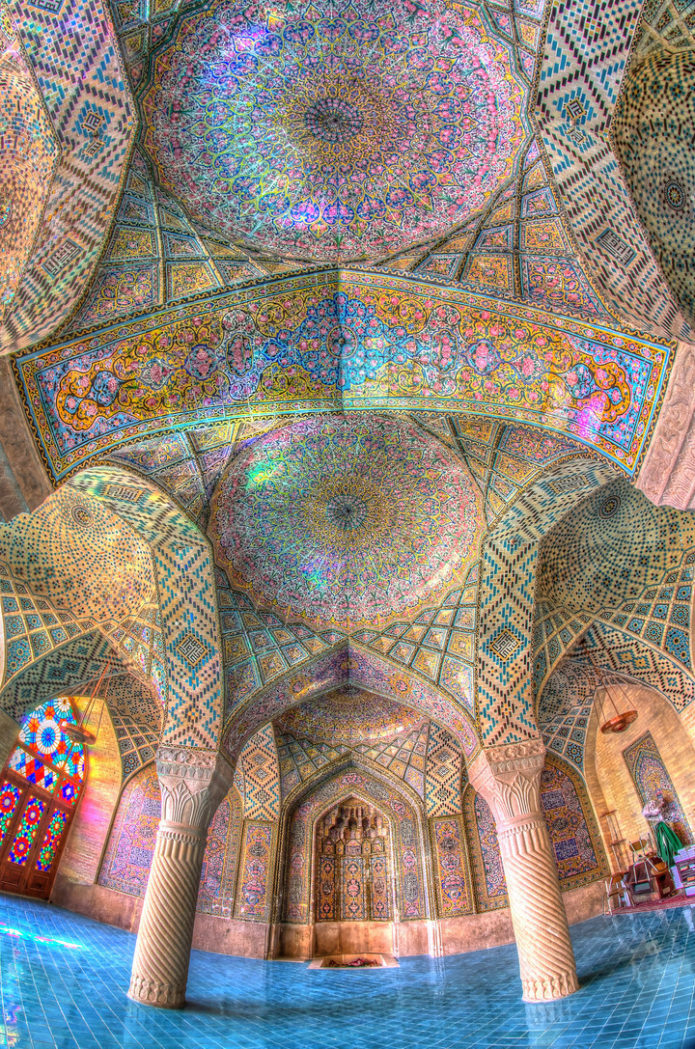 What is Islam’s view of Art & Creativity?

What does Islam say about art & creativity?

Art is the spontaneous reflection of the artist’s heart and soul through which his thoughts, feelings, and sensations find their way to the outer world. Only an artist allows this smooth transfer using his words, drawings, music, or any other form of expression, and the smother this transfer is, the more one fits the description of an artist. Picasso said it took him twenty years to learn how to draw like a child because he was aiming at this spontaneous reflection which is easily done by children.

This spontaneity which arises from the harmony between the inner and the outer world of the artist is what determines his artistic potentials. For artificiality is on opposite ends with art, and will produce nothing but imitators of the genuine artists. However, careful planning of the artistic work shouldn’t be mistaken for artificiality, since the former is required for keeping the senses focused on the artist’s project and ensuring the compliance of the tools of expressions.

Artistic talent is in its essence a strong urge to express what’s within the self. But for this urge to be interpreted in a smooth way, careful planning and mastering of the means of expression are a must. For sure, we have encountered many who have failed as artists because they insisted on unsuitable means of expression. And here lies the importance of learning art and training, on the condition that these are always accompanied by this flow from within. Otherwise the outcome will be a mere imitation.

Regarding the content, that is; what the artist reveals through art, this content can be described as either divine or devilish. By devilish we mean a righteous content that has been twisted or manipulated or taken out of context, resulting in a false outcome. This blend between righteousness and falsehood is a must in this kind of art, because falsehood cannot on its own sustain this devilish content. And that’s why every (work of) art must include a righteous aspect, which might be misleading to some and result in mistaking a devilish content for a righteous one.

However, whether this content is devilish or divine, it must originate from a source other than the artist. For man – on his own – is incapable of creating something from nothing. There must be a source, an origin for his creations. That is why there is no exaggeration in saying that the essence of humanity lies in the ability of humans to reflect what is cast upon them, whether from the devil or from the angels. According to a tradition by the Holy Prophet (s), every believer has in his heart two channels: one for receiving devilish input, and the other for angelic input which is backed up by God. So it’s up to man to choose which channel to tune in to and eventually, reflect its input.

However, there is another very important factor that makes the art reflected by each individual unique and characteristic of the individual himself. This factor is the unique mould that each individual is given by the Ultimate Creator.  This mould is a mixture of the mind, the innate nature, imagination, as well as psychological and physiological factors through which the individual perceives, interacts, and expresses his unique art. Every individual has a special mirror that is unlike any other mirror. This fact is evident for example in the unique sound-print of each one of us. Even though we share the same anatomy and breathe the same air, we don’t share the voices that we have. Each of our voices speaks of a distinctive identity.

Consequently, we should have limitless forms of art, because God’s creativity is limitless, with no repetitions. Unfortunately, this is not the case in most minds, and the prevailing view is that genuine creativity in artists is quite rare. This is simply because the majority of people decide to give up their God-granted unique mould, and settle for imitating others due to a variety of social, psychological, or economic reasons.

And due to this attitude, excellence in art has shifted from being about spontaneously expressing the content of the soul, to being dependent on mastering the means of artistic expression. And so, extensive training for unlimited numbers of hours became the key for success and distinction.

Hence, what is in essence a divine affair is being manipulated by the devil in order to prevent the manifestation of God’s greatness and magnificence. And that’s what art is all about and what it is supposed to be: the means by which God’s boundless greatness is reflected.

The Human Quest for Greatness

Here is where our responsibility lies: in preserving the unique mould that God has granted each one of us. For only by doing this will we be able to witness God’s greatness within our existence, and thus the secret of life will be revealed to us. We should never worry about the end result or the outcome, because it’s guaranteed by God. The only thing we should worry about is witnessing the divine wisdom.
Preserving this mould against any distortions and impurities and fully activating its potentials were the main goals of God’s prophets. However, these goals cannot be accomplished on a wide scale unless society with all its institutions (particularly the educational ones that have been playing a principal role in distorting this mould and impairing it for the benefit of ruling governments) believe in the divine creativity and regard art as their major responsibility.

Such a society will witness the ultimate divine flow on the condition that its individuals – as well – have been purified from all moral impurities.  In this society the great art of the Quran and the Infallibles will be revealed, thus marking – once and for all – the distinctive and sublime identity of this nation which will preserve it against the devilish art that has been – for so long – imposed on it. Such sublime identity will have the last word in this long-standing struggle, as it becomes the leading light in the human quest for greatness.