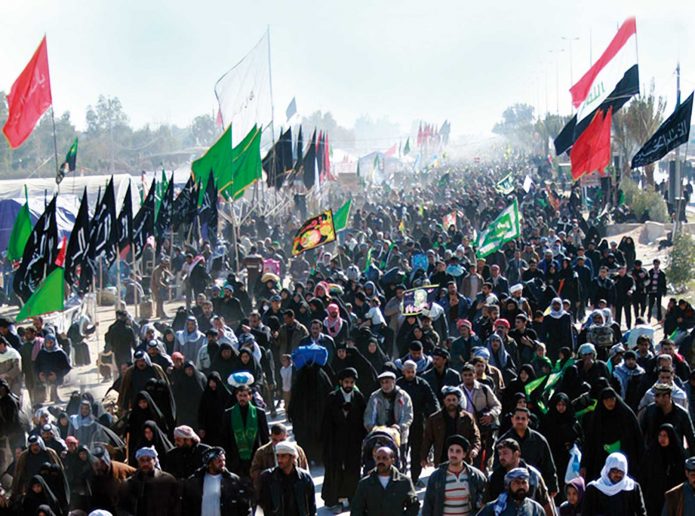 By the Grace of God I have been going for the Arbaeen walk in the last few years but recently a very disturbing and confusing video has been forwarded to me showing a public speaker who calls the walk a carnival and an innovation similar to Salat-al- Tarawih. He said this is an innovation which has shackled us. He also says ‘the walk was supposed to be a private practice for every individual to do it in their own good time’. He also said the Hadith says ‘walk from Euphrates to the Haram of Imam Hussein (as)’.

Please shed some light on the significance of the walk on Arbaeen. Is this really an innovation?!

This is not the first time or the first person who has attempted to extinguish the ‘Light of God’:

“They wish to extinguish God’s Light with their mouths, but Allah will not allow except that His Light should be perfected.” (Chapter 9, Ayah 32)

Although one of my colleagues has answered the above misgiving in a very academic manner, I will Inshallah shed some more light on this issue for your further information.

“Do not abandon the ziyarat (visitation) of al-Husain (as). Do you not like to be among those for whom the angels pray?!” (Kamelu-Ziyaraat, P. 119)

“I entered the house of Imam Sadiq (as) and I found the Imam on his prayer mat. I waited until he finished his salat (prayer). Then I heard the Imam saying in his supplication: “O Allah!… forgive me and my brethren and the visitors of the grave of my father al-Husain; those who spend their wealth and return (to his grave) in person (frequently)…” (Ibid, p.117)

“Verily, Fatima; the daughter of Muhammad (P) attends the visitors of her son al-Husain (as) and seeks God’s forgiveness for their sins.” (Ibid, P. 118)

1.4: Visiting the holy grave of Imam Husain (as) is equally recommended for both men and women. Um Saeed al-Ahmasiyah; a very learned female companion of Imam Sadiq (as) narrated:

2. Significance of walking to holy sites in Islam:

Walking towards the holy sites is a much recommended rite in Islam. It is a gesture of humbleness and homage. Walking to the mosque (Wasaelu-Shi’a, vol.5, p.201), going on foot for Eid Prayers (Ibid, Vo.16, p.152), walking to Haj and hence one of the virtues of AhlulBayt (as) was their frequent pilgrimage to Haj on foot, also walking for stoning the Jamaraat in Haj, and even going on foot to visit a believer (Thawabul-A’mal, p.32) are examples of its significance.

3. Significance of walking to visit the holy grave of Imam Husain (as) in particular:

Ibn Qulawaih has dedicated chapter 49 of his book to the merits of visiting Imam Husain (as) on foot. In one of its narrations it is quoted from Imam Sadiq (as):

“Whoever leaves his house aiming at visiting the grave of al-Husain Ibn Ali (as) if he is on foot, Allah will write for him for every footstep a good deed and will erase an evil (for him) until he reaches the al-Haer (the vicinity of the grave)…” (Ibn Qulawaih, P. 132)

Unfortunately the speaker has mistakenly assumed that the walk is supposed to start from the Euphrates! As you can see from the above narration one may start walking from his home if possible, for the longer walk the more rewarding. The recommendation of walking from the Euphrates which is in the vicinity of today’s city of Karbala is about walking barefooted, not just walking. Here is the text of the Hadith in Arabic:

“Then when you reached the Euphrates River perform your Ghusl (of Ziarat), hang your shoes around your neck, walk barefooted and walk like a very humble slave…” (Ibn Qulawaih, p. 133)

4. Walking on Arbaeen is a pure Islamic tradition NOT an innovation:

Walking to the holy grave on the 40th of Imam Husain (as) is a well-established Sunna and one of the signs of being a true follower of Ahlul-Bayt (as).

“The signs of a believer are five: praying 51 Rak’at daily, Ziarat Arbaeen, wearing a ring on the right hand, prostration on soil, and pronouncing the Bismillah loudly.” (Al-Mazar, P. 53)

‘The believer’ in the above narration is an expression for ‘a Shi’a’, and thus the above five mentioned practices are mainly observed by the Shi’a.

Therefore, walking on Arbaeen to visit the holy grave of Imam Husain (as) is:

a) a strong recommendation of Imam Sadiq (a.s),
b) a sign of a true believer according to Imam al-Askari (a.s),
c) is practiced by prominent companions of the holy Prophet (P) and Imam Ali (as),
d) and practiced by many Shi’a scholars throughout history when possible. Then how can one dare calling it an innovation and compare it with ‘Salat-al- Tarawih’ which its innovation is unanimously accepted?! In fact, Ziyarat Arbaeen is not an innovation even according to the Sunni principles, for it has been practiced by one of the companions of the holy Prophet (P); i.e. Jaber Ibn Abdillah. Perhaps that is why every year we witness more participation in this heavenly procession by Muslims of different denominations.

5. Ziarat Arbaeen is NOT supposed to be a private practice.

Unlike the false assumption of the speaker, a glance at the numerous narrations of AhlulBayt (as) certainly suggests that the visitation of Imam Husain (as) has to be publicized and globalized. I wonder how can a Muslim speaker echo the voice of secularism which calls ‘religion a private affair and should be kept that way’?!! It will not be surprising for such mentality to call the global Muslim pilgrimage to Haj another innovation and suggest that ‘it’s supposed to be a private practice to do it in your own good time’. Then Friday and daily congregational Prayers have to be also private practices! Muslim ladies also should not be allowed to practice their Islamic dress code, for ‘religion is supposed to be a private affair’. And the list goes on!

I heard from one of the Iraqi brothers: “During the reign of Saddam we had to keep the Arbaeen walk hidden and private, otherwise we could be put in prison or executed!” I cannot fathom how a Muslim speaker promotes ‘Saddam’s policy’?!!

6. Ziarat Arbaeen has NOT shackled us, it has liberated and united us.

I sincerely invite the speaker for the next Arbaeen procession to witness how Muslims of different denominations along with Zoroastrians, Sabians and others walk on this heavenly worshipping act hand in hand. Instead of making such unprofessional and derogatory comments please do join ‘the world’s largest and peaceful annual pilgrimage’ and witness for yourself a utopia where its citizens are the most generous, the most caring, the most sacrificing, and yes the most loving people for our dear al-Husain (as). And finally I humbly appeal to such speakers to follow the wise recommendation of Imam Sadiq (a.s) where he says:

“Remain quiet on matters unclear to you, for it is better than indulging in utter destruction.” (al-Kafi, vol. 1 p. 68)