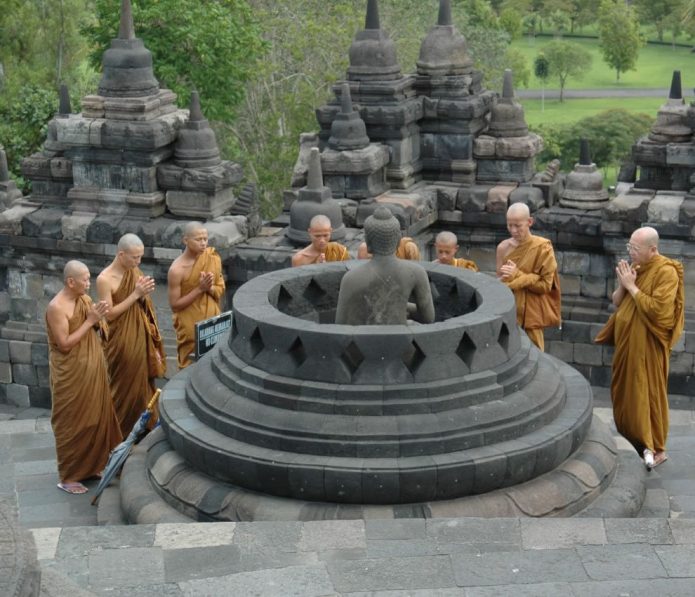 I was listening to a public speaker who was saying (I’m including whole passages so that I am not taking the speaker out of context):

“The Qur’an gives salvation to the Sabians and Zoroastrians (Majus) despite us reading that these people worshipped the fire and stars. But because they did not see independency of Lordship for the stars and the fire, but they saw them as means to God, therefore their respect for the fire and stars was only a gesture of respect, and not worship of a God that was independently giving them something, they are not considered as mushrik. According to this therefore, the modern-day Hindus, if we can see that they actually believe in one God, and that the rest of the deities they worship are reflections of one God, and avatars, then it would be difficult to group them alongside the mushriks of Mecca.

When we look at the Qur’an very carefully, we find that the mushriks of Mecca did not believe in other deities…per se to be independent God…in addition they saw themselves worshipping a god that was giving them contrary values to what Allah (SWT) was giving. So for example, Allah says in the Qur’an how can God command you to do things that are indecent, and you are saying that I am commanding you to do things that are indecent and things that are totally forbidden. So the message here is that the mushriks of Mecca were worshipping a different form of God-notion of God, in which their worship of god and their god stood in opposition to Allah (SWT).

If we now ask the Hindus now what does your God command you to do? They would say he commands us to be charitable, truthful, loving…and we find that the Hindu God tells them the same thing that our God tell us. So further on we say that no, we cannot classify the Hindus as the mushriks of Mecca. The mushriks of Mecca are considered in the rightest sense to worship a multiplicity of Gods and were worshipping the enemies of Allah. On the other hand, Islam is so broad that it tolerates other religions and cultures and allows them to slowly and gradually grow.”

As my knowledge about Islam and the Qur’an is very limited could you please clarify the above statements for me?

May God bless you for cross examining the information you receive. It is very unprofessional for a public speaker to share such discussions with the general public who are not qualified to examine the validity of the above arguments.

The Almighty God in the Qur’an states:

Verily, We have sent down the Book to you (O Muhammad) in truth; so worship Allah alone by doing worshipping sincerely for Allah’s sake only. Lo and behold! Surely, the worshipping (or religion) is for Allah only. And those who take lords besides Him (claiming): “We worship them only that they may bring us near to Allah”, verily, Allah will judge between them concerning that wherein they differ. Truly, Allah guides not him who is a very disbelieving liar (Az-Zumar, 2-3).

1. According to the majority of the interpreters of the Qur’an, the term ‘Deen’ in the first and the second Ayah means ‘worshipping’ (If it means ‘religion’ the argument will be even easier). Then the message of these two Ayaat clearly is:

Different polytheists throughout history had different excuses for worshipping other than Allah. The idolaters of Quraysh claimed Allah is too high and mighty to be worshipped and hence we have to worship His representatives ‘as means of nearness to God’. Thus, different tribes had different idols presumably ‘representing Allah’! Yet, the Almighty Allah in the above Ayah rejects this dogma and regards them as ‘very disbelieving liars’.

2. The speaker has also assumed that if a community presumably stands for moral values, their ideology and the way they perceive God is justified, because at the end of the day we ‘both share the same moral values’!

This statement is contrary to the teachings of the entire Qur’an. Throughout the Qur’an the Almighty Allah emphasises on ‘Faith’ and ‘righteous good deeds’ together. If ‘moral standards’ were sufficient, then belief in God is unnecessary in the first place as atheists can also very well claim ‘they abide by moral values’. Besides, the Mushrikin (polytheists) of Quraysh also were not void of all moral values. They would admire generosity and hence Hatim al-Taei – although he lived and died as a Mushrik (polytheist) – is still an exemplary figure of generosity.  Similarly, the Arabs of Jahiliyyah (pre-Islamic ‘age of ignorance’) were well known for sheltering a ‘refugee’ and say respecting a ‘covenant’. They were on the peak of eloquence and poetry. If ‘Faith in Allah’ was unnecessary, I wonder why the Holy Prophet (SAW) did not ask them “What does your God command you to do?” (as the above speaker has proposed). Then the Holy Prophet (SAW) could confirm their good deeds and just advise them on their immoral practices. As for ‘worshipping idols’- similar to our speaker – the Prophet (SAW) should have given them the benefit of the doubt and “let them grow slowly”!

That is why if you can read between the lines, the dogma of ‘religious pluralism’ in essence aims at secularisation.

Please also read the Fatwa of His eminence Ayatullah Sistani about the meaning of a ‘Kafir’:

Question: What is your definition of a ‘Kafir’?
Answer: A Kafir is the one who does not believe in any religion, or believes in other than ‘Islam’ or believes in ‘Islam but denies what he knows to be part of Islam in such that his denial results in denying the ‘Message’ (of the Prophet Muhammad (SAW)). (Ayatullah Sistani, Menhaju-Saleheen, Vol.1 P. 130)

Editor’s note: if you are interested in further detailed information on ‘religious pluralism from the Islamic perspective’, check out this somewhat comprehensive Q&A on our site, as well as this crash course, both of which are from the same author of this Q&A.