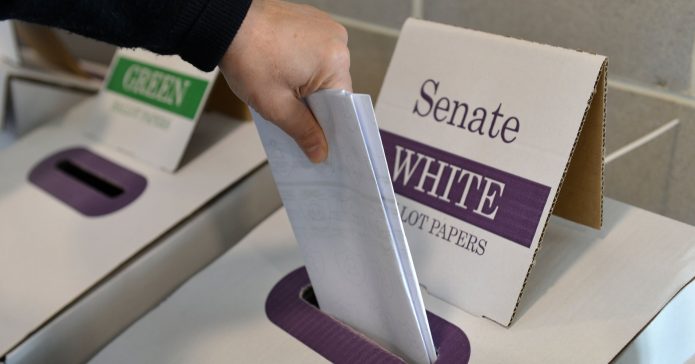 Attending or not attending an election is a personal choice. However, please consider the following points when making your decision:

a) Some countries like Australia enforce compulsory voting and penalties may apply on those who fail to do so. That means that as a law-abiding citizen you are expected to attend the polling booth, although the law allows for exemptions in certain circumstances.

b) The advantage of fairly conducted elections is that they provide the best expression of the electorate’s political preferences. If you live in a country that provides the right to vote and voice your opinion, then you should care about what happens and try to be an active member of that society.

c) When you don’t vote not only may a penalty be incurred on you, but also, you have in fact given up your democratic right to others who may not act in your interest. Did you know that when elections were introduced in Australia in the early 20th century, it was mainly for ‘British subjects’ and not the indigenous people? In fact, they were excluded. Do you wonder why?!

d) According to the 2016 Australian Census, Muslims constitute 2.6% of the country’s population. You may think this is a small percentage, right? Wrong! After the 2013 federal election “Senators elected on primary votes of less than 1% of a quota were able to thrust themselves into the public debate by joining together to block the passage of contentious legislation.” (Source).Therefore, if 2.6% Muslims vote as a bloc, they can secure a senator in each State.

e) Over 50 million Muslims live in Europe and the number is indisputably increasing. According to the U.K. Office for National Statistics, in 2017 28.7% of Birmingham residents were reported to be Muslims! According to the same source 40.3% of people in Tower Hamlets were Muslims! (Source).

Can you imagine the voting power these Muslim communities are losing in a democratic society?

f) If the first Muslim migrants were excused as they did not know the language of their new land, nor were they familiar with their civil rights and were mainly migrants from countries where autocracy was the only form of government, what would be the excuse of forthcoming generations living in a democratic country who forgo all their political power to others?! So far as you feel powerless against the system you are destined to suffer. You need to believe that you can make a change, but the change begins from within. “Verily! Allah will not change a condition of a people as long as they do not make a change in themselves.” (The Holy Qur’an, 13: 11)

Having said that the issue of voting falls under the Islamic principle of ‘community interest’ (Al-Maslaha). When giving your vote you should weigh up the interests and benefits of your community against the harm they may result from your wrong vote or not voting. If the benefits outweigh the harm, then you have an Islamic obligation to vote. – ‘the interest’ of the community can be as limited as local and domestic services. Half a loaf is better than none!

– ‘the interest of your community’ includes even warding off a greater evil.

– In consideration of the above principle there is no difference between a Muslim or non-Muslim candidate or any particular party. Your preference and decision should be purely based on ‘community benefit vs harm’.

– Obviously attending an election requires voting education. Many MPs will represent the views of their parties. You need to thoroughly do your homework to know all about the pros and cons of various parties and candidates. Your local Islamic Centre can assist you in providing useful information and the many benefits that your vote may achieve. I’m sure with collaboration and collective efforts the Almighty God will certainly bless you to reach a collective intelligence to serve your community.

What is the meaning of ‘interest or benefit’ (al-Maslaha) which justifies voting for a candidate?

Muslim jurists are quite unanimous that Islamic statutes are legitimized on the basis of ‘the best interests of the community’. The late M.H. al-Najafi, a leading jurist of the 19th century states: “Our jurists’ understanding of the apparent text of the Holy Qur’an and the Prophetic traditions is that all types of transactions and other (social) statutes are exclusively legitimized for the interests of people both in this world and the next. This ‘interest’ is called Maslaha.” (Jawaher, vol. 22, p.344)

For example, lying is a mortal sin. However, a harmless lie which is even helping a reconciliation is permissible. The application of the principle of ‘community interest’ in elections may have two main facets; a) obtaining community welfare, and b) repelling a greater evil.

Is voting for a candidate like paying allegiance to them such that I have to remain loyal and submissive to them no matter what they may do?

The role of Members of Parliament is to represent their constituencies. Therefore, your elected candidate is your representative who is expected to act on your behalf. Your loyalty and support are conditioned to their representation only. Therefore, voting is not equivalent to allegiance.

If I vote for a candidate and they happen to be a wrong person would I be accountable for their mistakes?

This may happen to any candidate anywhere in the world. The answer is as long as you voted to the best of your knowledge and were convinced that there was a genuine ‘community interest’ in doing so you are excused.

If I don’t condone all policies or ideologies of a candidate can I still vote for them?

If their beneficial policies outweigh the ones you don’t condone then your vote is justified.